Laurence Binyon (1869-1943) was considered by many of his contemporaries to be one of the leading poets of his generation. He was also an eminent art historian, with a specialist interest in Chinese and Japanese art. After studying at the University of Oxford he worked at the British Museum for forty years, latterly as Keeper of Prints and Drawings.

Binyon was over-age for military service when war broke out in 1914, but he wanted 'to be made use of' in some way. He used his holidays and unpaid leave from the museum to work as a medical orderly at the military hospital in Arc-en-Barrois, where John Masefield also served in a similar role. In 1917 Binyon was commissioned by the Red Cross to visit and write about the hospitals and dressings stations in France that were run by them. He wrote about his experiences in a remarkable book called For Dauntless France, published the following year, re-issued as a centenary edition by Dare-Gale Press in 2018 under the title The Call and the Answer.

In 1933 Binyon succeeded T.S. Eliot as the Norton Professor of Poetry at Harvard University. The outbreak of the Second World War in 1939 triggered a period of deep reflection and renewed creativity for Binyon. 'The Burning of the Leaves'is widely regarded as his masterpiece, evoking the fragility of life in an England under threat of invasion and destruction. 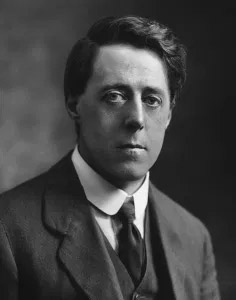 In 1933 Binyon succeeded T.S. Eliot as the Norton Professor of Poetry at Harvard University. The outbreak of the Second World War in 1939 triggered a period of deep reflection and renewed creativity for Binyon.

'The Burning of the Leaves'is widely regarded as his masterpiece, evoking the fragility of life in an England under threat of invasion and destruction.

Get notified of new releases and guest author posts!

You have Successfully Subscribed!

We use cookies on our website to give you the most relevant experience by remembering your preferences and repeat visits. By clicking “Accept All”, you consent to the use of ALL the cookies. However, you may visit "Cookie Settings" to provide a controlled consent.
Cookie SettingsAccept All
Manage consent

This website uses cookies to improve your experience while you navigate through the website. Out of these, the cookies that are categorized as necessary are stored on your browser as they are essential for the working of basic functionalities of the website. We also use third-party cookies that help us analyze and understand how you use this website. These cookies will be stored in your browser only with your consent. You also have the option to opt-out of these cookies. But opting out of some of these cookies may affect your browsing experience.
Necessary Always Enabled
Necessary cookies are absolutely essential for the website to function properly. These cookies ensure basic functionalities and security features of the website, anonymously.
Functional
Functional cookies help to perform certain functionalities like sharing the content of the website on social media platforms, collect feedbacks, and other third-party features.
Performance
Performance cookies are used to understand and analyze the key performance indexes of the website which helps in delivering a better user experience for the visitors.
Analytics
Analytical cookies are used to understand how visitors interact with the website. These cookies help provide information on metrics the number of visitors, bounce rate, traffic source, etc.
Advertisement
Advertisement cookies are used to provide visitors with relevant ads and marketing campaigns. These cookies track visitors across websites and collect information to provide customized ads.
Others
Other uncategorized cookies are those that are being analyzed and have not been classified into a category as yet.
SAVE & ACCEPT
Scroll to Top